THE VOICE OF THE EXPERTS

ARGENTINA: THE CARTOGRAPHY OF THE NATIONAL TERRITORIES (1885-1930) 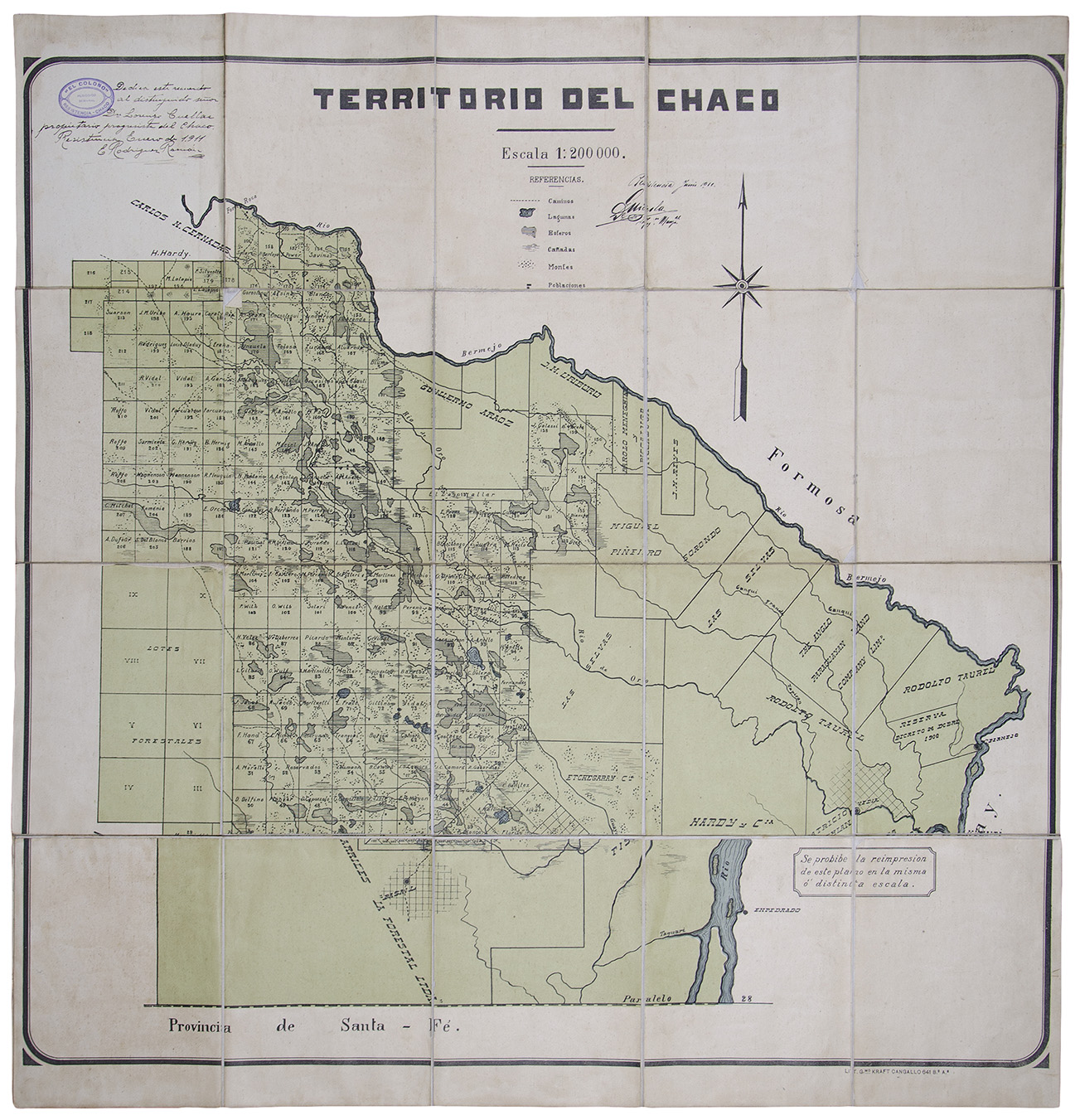 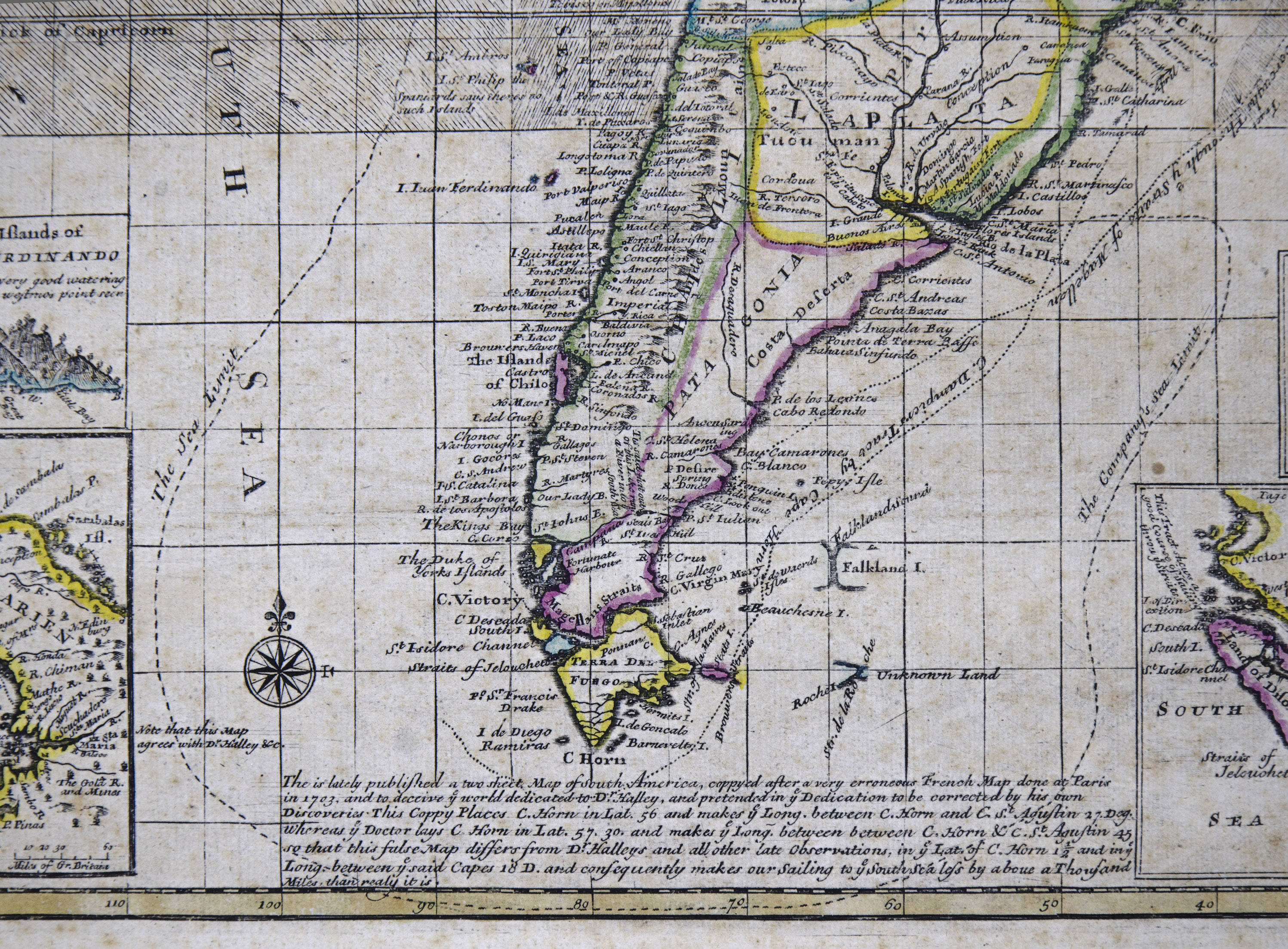 The cartography that Hilario has offered in successive auctions on the subdivisions of the National Territories shows an interesting result of the process of division of the land framed in the purposes of the generation of the 80's of to govern is to populate, as defined by Juan Bautista Alberdi.

In this sense, the occupation of borders with tenacious but flexible advances towards the north and south of the Argentine territory, began to consolidate with the formation of the settlements of Reconquista (1872) in the north of Santa Fe, Resistencia in Chaco (1878) and Formosa (1879). In turn, the persistent and slow territorial occupation towards the south after the 1880 campaign made it possible to replace the English, French and Spanish cartography that maintained a fictitious country "Patagonia" in the south of the continent, a kind of free area arranged to be populated by various interested. (1)

The idea of ​​occupying the space was marked by a process that did not merely mean obtaining ownership of the land, but also the obligation to measure and populate with settlers, as had been done in previous decades in the region of the fluvial littoral and in the Buenos Aires and central areas of the country. These criteria supported the proposals of the sanctioned legislation.

The Central Office of Lands and Colonies was created by a Law only on October 19, 1876 and since its foundation it aspired to govern the administration of the public lands (2), while another agency, the Department of Engineers, was doing the studies for the location of towns and colonies. Thus, by a report by these technicians on November 15, 1879, President Nicolás Avellaneda decreed the reservation of 160 square leagues on the left bank of the Río Negro and 130 leagues on the Río Colorado, intended for the formation of populations. (3)

In its origins, the erratic administrative location of the old Office of Lands and Colonies, showed the lack of clarity with which the State administered its properties, since the successive changes in ministerial dependency (it went from Interior to Finance, Foreign Relations and finally Justice, Worship and Public Instruction) implied confusion in the procedures and the impossibility of continuous controls.

However, the Immigration and Colonization Law passed on October 19, 1876 imposed a certain order and accelerated the times for the effective territorial domination of the spaces that the cartography of the time still called "Indian Territory to the south" or "Indian Territory to the north" (3). The placement of bonds in 1878 to finance the "transfer of the border", exchanging them for lands of the recovered ones, showed confidence in the success of such operations. When the "conquest of the desert" ended, according to Míguez, much of "the land was already pledged as security for it and was distributed among bondholders in subsequent years (5). To this we could add land deliveries for "Military Awards" of 1885.

One of the key problems of the Colonization Law was the indeference of its qualities in lands to the north and south, as a result of ignorance of them and their possibilities. The same could be said with the regulation of settlements and towns that uniformed territories with different climates and geography. Many of those successful bidders analyzed their agricultural and livestock potential once they effectively occupied their land.

Only after the desert campaigns of the 80s, the organization of the National Territories was sanctioned, according to a law of October 16, 1884, the nine Governments and the administration were created. Finally, Law No. 1265 of November 3, 1882 dictated the division of national lands into three major sections, defining the limits of the territories of La Pampa and Patagonia, and declaring "lands of bread to carry" to the territories of the Chaco and Misiones. The limit of the individual concessions was stipulated to 40,000 Hectares, imposing the binding obligation to populate them. This type of concession with surface limits was thought to be the ideal means of preventing the concentration of land in a few hands.

The grid of the territory, under the omnimous tutelage of geometry, was simple for the purposes of the surveyors' tasks, but this conception "so regular and perfect, must necessarily give bad results, since the water courses were not evenly distributed proportionally, valleys and other accidents that had to be taken into account when practicing the subdivision of the lands, all the more so when the terrain on which it was going to operate was not known  (6). A city like Resistencia, for example, was drawn up in a territory strewn with lagoons. On the other hand, in the colonies, the city was a module similar to that of the agricultural plot, with a large extension difficult to densify.

Military awards and the fate of the vanquished

By law No. 1628 of September 5, 1885, it was agreed to give land prizes to the chiefs, officers and troop soldiers who participated in the Río Negro campaign, which was the subject of long lawsuits, especially for the occupation of lands that the surviving native people.

A short time later, on December 4, 1889, the National Executive Branch ordered the foundation of an Agricultural Colony in the Valcheta fiscal fields, expressly destined for the settlement of native people, but a decade later, the measurement. In 1899, the Government verified "that their extension is not sufficient, however, for the establishment of all the indigenous people of the mentioned territories and that, in addition, it is convenient to tend to mix with them colonists of European race". Under this argument, the pastoral colonies "Valcheta" and "Catriel" were formed, stripping the indigenous of those reserved lands (7). In 1910 "all those natives who were in Chichinal and Valcheta" in 1887, were scattered "throughout the territory of Chubut, being shepherds of sheep, economic in the expenses of the life as the Director of Lands and Colonies said.

On August 24, 1894, eight leagues of field were handed over to the chief Manuel Namuncurá and his tribe on the right bank of the Negro River, in the place called Chipay, "or at another point, if there were no lands available. The lands - three leagues for the chief and the rest for the families of the tribes - were delivered free of charge by order of President Roque Saénz Peña. (8)

In this context, the handing over of large tracts of land to companies that promised to carry out an effective colonization, increased requests for tracts of up to 80,000 hectares without actually making a commitment to locate 250 colonizing families by concession. "With the prospect of having large areas of land, individuals and societies launched themselves requesting concessions that were later expired and the few that were not yet are causes of issues between settlers and businessmen. (9)

Here the organized system for the appropriation of large estates began to manifest itself. They were Argentine citizens who were requesting their 40,000 hectares in the Chaco, Misiones or somewhere in Patagonia with the commitment to measure and settle the 250 families. Obtained the assignment, the following year they transferred it to an English citizen who obtained the approval. The new owner requested the transfer of ownership from the Chaco to Río Negro, explaining that the land granted was not suitable for cultivation. He obtained a similar plot and the same was done by other British owners, adjacently forming an extension of up to 400,000 hectares. The English owners domiciled similar offices in Buenos Aires, used the same surveyors, and were part of the same companies.

The economic crisis of 1890 required a review of the circumstances in which these concessions were found, although it was always done for the benefit of the new owners. The large businessmen who had not carried out the committed colonization, adjusted to Law No. 2875 of November 21, 1891, which allowed them to definitively title the concessions of the Avellaneda Law with the return of 25% of the land received and the cancellation of the obligation to populate them, but with the requirement to measure within a maximum period of 15 months.

Another issue that was taken with particular care after the daring experiences that were lived in the first years was that of the transfers of places from the concessions. In the year 1892, any change of location of the lands granted to colonize was prohibited, affirming that although the Immigration Law of 1876 imposed agricultural colonization, this requirement had expired since 1891 and therefore could not be claimed to make swaps of place. In 1895 it was decreed that the relocation of concessions could only be made within the same National Territory and a year later the coasts were reserved for the nation up to 20 kilometers inland, in Río Negro, Chubut, Santa Cruz and Tierra del Fuego.

A balance made at the beginning of the 20th century criticized the consequences of the Avellaneda Law of 1876 that, beyond its objectives, had produced "disastrous results" due to the free transfer of "large tracts of land to individuals, with the express obligation to subdivide and populate them, establishing for this purpose strict clauses, but of dubious compliance, because in most cases there were natural obstacles that invalidated the responsibilities contracted and easily, these were evaded, without for that reason the acquirers lost the right to the lands obtained, especially when they were later granted the property by incorporating a capital in cattle and the payment in money of half or three quarters of the area granted . (10)

When colonization failed and large tracts of land were delivered at low prices and long-term payments, many of them were accumulated on a speculative basis, determining that "the high ends pursued were completely distorted" and opened the doors to the large estate. For this reason, there were not a few who argued since the beginning of the century that colonization should be faced with national capitals and fundamentally attending to promoting empty spaces. (11) Juan Alsina called a good part of the land grantees of that first phase "pseudo-agricultural colonizers", saying that "hardly any other population has been made by them." (12)

A dynamic fragmentation of land in other areas also emerged from this process, especially in northern Chaco and Santiago del Estero, which gradually progressed over the regions of La Pampa and the extreme Patagonia. The presence of the railway was another of the key issues in the rapid territorial occupation. Already in 1876 it was proposed that the new owners should cede land to the railway line. But those transferred to Patagonia insisted on the elimination of such requirement due to the absence of projects. In reality, the railway businessmen in Puerto Madryn or the Forestal businessmen in Santa Fe and Chaco, set up their own railroad networks to supply their production and marketing needs. The formation of the roads that articulated these new production areas complemented in this cartography an essential vision of the railroad network that had once generated the trajectory of the real roads in the vast territory.

The cadastral cartography that Hilario has made available to researchers and collectors makes it possible to verify the property's diaspora in a process that gradually encompasses the national territories and expands in the peripheral areas of the old provinces. The expansion of certain new areas generated by extractive potential, as would be the case of Comodoro Rivadavia, also marks a management of the important areas that came under state control and a series of alternatives arising from the population experiences of previous decades. (13)

4. A. Peterman. Original map of the Argentine Republic. Gotha.  Justus Perthes. 1875. The map was made with documentation from the Directorate of National Engineers.

Send us an email briefly indicating which works you intend to put on sale, and we will respond. click here

Complete with your registered email: